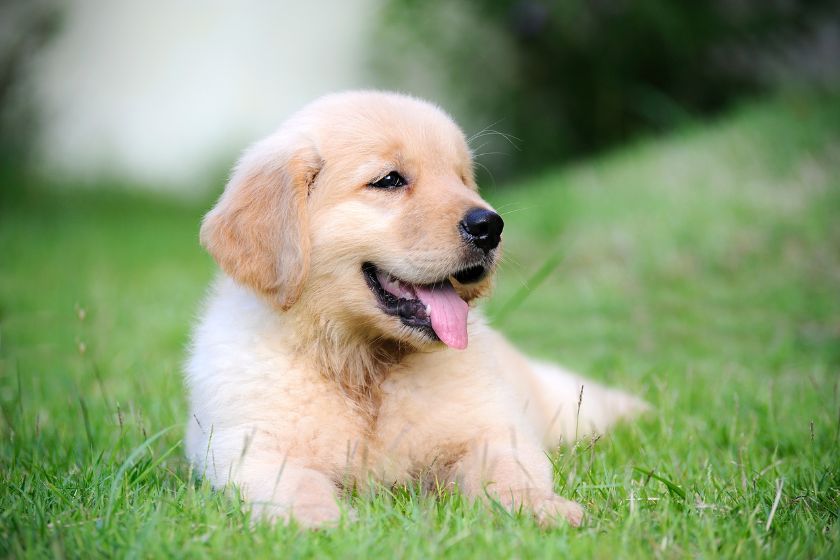 To many pet parents, puppy crazies doesn’t seem like a big issue. However, if a puppy’s overexcitement isn’t curtailed, it can progress to other undesirable behaviors.

It could also cause your pup to not listen to you even when it grows. Often, this is a recipe for disaster. Hence, you need to learn how to calm a puppy down.

Puppies are cute angels, but sometimes their angelic quality is hard to find beneath the ruckus when they start zooming around.

These little furballs can get into a state of exaggerated happiness.

They bark, jump around, snarl, chase their tails, and exhibit other characteristics that are now known as overexcitement.

Not sure how to go about this? Here’s a complete guide for you with tips from dog experts.

We’ll look into why this overexcitement happens, what triggers it and how to calm your dog down in the middle of the excitement.

In this Article show
Why is my Puppy Over-excited?
What Triggers the Over-excitement in Dogs?
Fatigue
Stress
Adapting to a new environment
Excitement
Frustration
At What Age Do Puppies Calm Down?
Steps to Calm a Puppy Down Successfully
Step #1: Identify the triggers
Step #2: Don’t encourage the behavior
Step #3: Don’t assume they’ll grow out of it
Step #4: Replace their overexcitement with something to do
Step #5: Distract
Step #6: Remain Calm
Step #7: Reward calm behavior
Will a Crate Help Calm My Puppy?
Frequently Asked Questions
At what age are puppies most hyper?
At what age do puppy crazies stop?
Wrap Up

Why is my Puppy Over-excited?

There’s usually a reason (or many) that explains why your puppy is over-excited.

It may seem random sometimes, but there are triggers associated with it.

We’ll look into some of the common triggers, but before that let’s clarify some issues related to overexcitement.

First, there’s a difference between high energy and overexcitement.

The signs are often similar, but hyperactivity is not as random as overexcitement and needs no triggers.

Hyperactivity can also be managed by exercising, but overexcitement has its own set of solutions.

The next clarification involves the word zoomies, which is often used with overexcitement.

Zoomies is also called the Frenetic Random Activity Periods (FRAPs), and it boils down to an explosion of energy that makes a puppy run to and fro in an uncontrollable manner.[1]

Zoomies are an obvious sign of overexcitement, alongside jumping, barking, nipping, spinning, and a couple of others.

What Triggers the Over-excitement in Dogs?

Now we look at the common triggers of over-excitement in a puppy’s life.

There are many of them and what might trigger your pooch may not be the same as that of your neighbor.

The few ones we rounded up are more generalized. The common triggers are:

Puppies need a long period of sleep, getting to 18 hours daily.

Sometimes puppies can’t have the quality of sleep they desire, leading them to feel unbalanced and excitable.

This is similar to how irritated and touchy we feel when we haven’t slept enough.

Stress is a problem for puppies as it is for humans, and pups react to it in different ways. Some of them would get quiet and withdrawn when stressed.

Some might whine. The third category is our concern. These pups would get excitable when stressed, possibly as an outlet.

Adapting to a new environment

Moving to a new country, city or neighborhood can affect a puppy as it struggles to adapt to these changes.

The pup could become anxious, overwhelmed, and even afraid. All of these can make it over-excited.

Does your puppy do the zoomies when you get back from work? It could be because it’s happy to see you!

When your puppy wants something but is unable to get it—for whatever reason—the pup can get frustrated and express that through hyper behaviors.

Don’t we do that as humans, too? Remember when you last misplaced your car keys?

To determine which trigger is responsible for your pup’s behaviors, you could ask some questions like:

These questions and more can help you determine the specific triggers for your pooch.

At What Age Do Puppies Calm Down?

There’s no guaranteed age where you could expect your puppy to stop getting over-excited, but it can stop as your puppy gets mature.

Over time it’ll grow older, and its energy will reduce. If you give it the right training and socialization, it will learn how to behave better.

The major role is yours. Even after the energy dies down, your puppy would still exhibit these behaviors if you don’t give it adequate training.

This is especially true for highly energetic breeds herding dogs and terriers.

Steps to Calm a Puppy Down Successfully

Just as we pointed out above, triggers are the root causes of over-excited behaviors.

Thus, the first step would be to identify the behaviors that cause the over-excitement, as well as the specific details of the moments you noticed the hyperactive signs.

We know it looks cute, and if it is your first-time pet parenting you will be happy to see your puppy acting so active.

However, encouraging the behavior is a big mistake.

You may inadvertently do this by giving your puppy full attention while it displays this behavior, or even overreacting in return.

Instead, aim to be as neutral as possible.

Step #3: Don’t assume they’ll grow out of it

We’ve mentioned that energy reduces as a puppy grows older. However, this doesn’t mean overexcitement will disappear automatically.

Overexcitement isn’t always linked to high energy and can be found in adults as much as puppies.

To curb overexcitement, you need to understand the cause and practical solutions.

Step #4: Replace their overexcitement with something to do

For this to succeed, you should have already taught your dog commands during their calm moments.

If you haven’t taught them anything and you try to issue a command (such as Sit), they may not listen.

This is why you should start training early enough with a dog training checklist for the best results.

That said, if you haven’t taught them anything and you have a case of overexcitement in your hands, then you should try the next step.

Treats are the best tools for distraction. Don’t hold them in your hand the way you would when training as your puppy may not notice it.

Instead, place it on a snuffle mat or the floor. That way, it would be drawn towards the treats and start sniffing.

You can also use a chew toy to help redirect your pup’s mind.

Dogs respond to our emotions, either positive or otherwise.

If you panic, get angry, are stressed, or show any emotions besides calmness, it may push your puppy to get more excited.

Hence, your best response is calmness.

Rewards are good motivations to stop a particular behavior, and when your pup associates reward with that behavior, it will be motivated to do even more.

When it successfully calms down, reward it with a good dose of positive reinforcements. It will serve to encourage a calmer state of mind.

Will a Crate Help Calm My Puppy?

Crates do come in handy when trying to calm a dog, particularly when the steps above don’t seem to work.

This could be because the pup is way out there to calm down easily.

Tiredness is a major cause of this difficult form of overexcitement, especially when your pup is meant to be asleep but isn’t.

To prevent this, place your dog on a sleep routine so it won’t keep playing when it is tired.

You should then give it some crate training to enable it to stay in the crate.

If it isn’t sleeping time and your pup is excitable, you can keep it in the crate with stuffed toys to play with.

At what age are puppies most hyper?

Puppies are usually hyper right from a young age, from one day old. They tend to start displaying erratic behaviors almost as soon as they were brought home.

At what age do puppy crazies stop?

There’s no fixed age for a puppy’s crazies to stop. It depends on you as the owner and the puppy’s growth.

Usually, when the pup is well trained, it will stop being over-excited as it gets into adulthood.

A puppy’s overexcitement may seem harmless or even like a good thing. However, it can have consequences later on.

Once you’ve figured out the root cause of the puppy’s behaviors, use different methods to reduce it before it becomes an adult.

Robert Miller is a dog behaviorist and professional dog trainer. With more than eight years of hands-on experience in the field, Robert relishes sharing his vast knowledge to help prospective pet parents choose the right dog breeds that suit their lifestyle and provide dog owners with the information they need to ensure they raise a well-behaved canine companion. ...