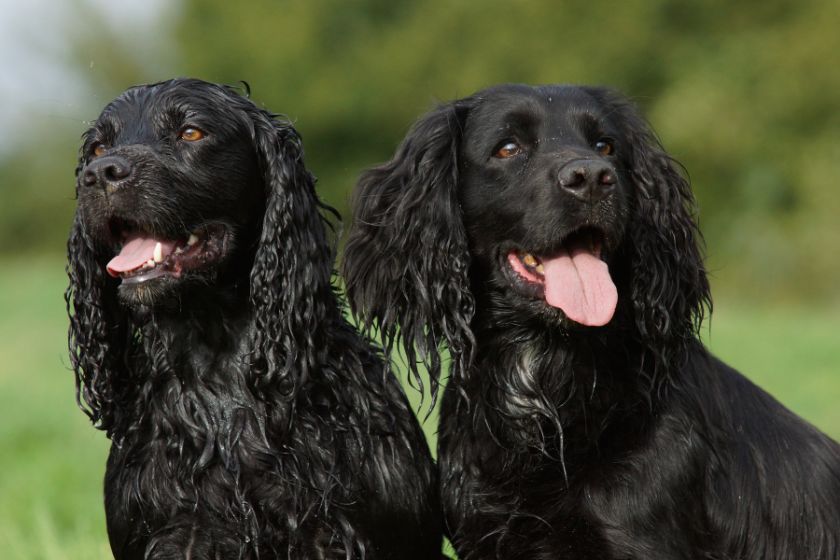 Spaniel dog breeds are easy to fall in love with, so if your idea of a pet is something akin to Lady in Lady and the Tramp, you’re far from being alone.

Spaniels have proven to be good family dogs, and over time they have acquired a good number of fans.

But how well do you know about the different types of spaniels? And how many are there? According to the American Kennel Club, there are 15 recognized purebred spaniel dogs.[1]

We’ll be looking into these breeds, right after an overview.

What are Spaniel Dog Breeds?

Spaniels are classified under gun dogs. These dogs were bred to assist hunters to find prey, retrieving them, or getting the hunter to where the prey is.

Spaniels are flushing dogs that helped flush prey out of hiding. Some spaniels work in water, others on the land. They played these roles more in the 17th century.

The word “spaniel” was derived from the Old French word espaigneul which means “Spanish (dog)”.

The Different Types of Spaniels

The American Water Spaniel is not very popular in all areas of the United States—there’s an estimate of 3,000 left—but that doesn’t remove the many good attributes it has.

It was developed in the United States, precisely the Fox and Wolf River valleys in the 1800s.

It loved to work close to its owners and adapts to both land and water. It was recognized by the American Kennel Club in 1940.

The American water spaniel is a lively and happy-go-lucky breed.

It is also affectionate and enjoys being around its family, especially the individual that gives it more care and attention.

It needs firm but gentle training, as well as enough exercise.

The Boykin Spaniel is another less popular spaniel breed, and not much is known about it.

It originated in South Carolina in the 1900s to hunt turkeys and ducks. Its size was fitting for boat travel and it could hunt on both land and water.

The Boykin Spaniel was recognized by the American Kennel Club in 2009.

It didn’t take long for people to realize Boykin was as good at home as it was in the fields.

It is a merry, avid dog breed that’s highly trainable but might be too energetic for many new pet parents.

It has a lot of confidence too and is not your typical lazy dog. Boykin is an excellent companion.

The Brittany dog breed was developed in France, in a region that bears the same name.

It is considered a very versatile bird dog and could flush anything from ducks to partridges.

Modern Brittanys came to be in the 1800s, and they were revered for their speed, agility, and obedience. It was recognized by the American Kennel Club in 1934.

Brittany is more popular than the first two Spaniels mentioned, and it currently is in the Top 30 most popular dog breeds.

This makes it easy to find, which is good news for lovers of this breed. As a family dog, Brittany flows with infectious optimism.

It is also alert and curious. Training should be consistent and firm but not harsh.

Cavalier King Charles spaniel is the kind of breed you’d want to start your pet parenting journey with. It is a small spaniel, so the size is manageable.

The energy is also easy to handle because of its small size. It can adapt to different environments and is easily groomed.

What better way to become a pet parent?

The Cavalier King Charles spaniel was placed in the toy group rather than the sporting group because of its size, and it started as a companion rather than a hunting dog.

While it does have the hunting instinct because of its ancestors, it isn’t too fit for the fields.

clumber spaniel is another spaniel breed suitable for both new and old pet parents, as well as those living in cities or the countryside.

It was developed in England, and while its origin is clouded, we know that it was a hunter’s favorite in the mid-19th century.

King Edward VII also loved this breed and owned many. They got into North America in 1844 and it got recognized by the American Kennel Club in 1878.

The clumber spaniel is one of the rare Spaniels, but the search for it always turns out to be worth the wait.

It is generally quiet, especially when working or indoors, and you won’t have to deal with the hyperactivity of some other Spaniels.

It is also loving and affectionate, but also moderately stubborn. Establish your leadership early enough.

This breed is the smallest in the sporting group but was not confined to companionship. It hunted woodcocks, and needless to say it was good at it.

When the cocker spaniel got into the United States, it began to be bred following different standards.

The cocker spaniel (as the American variant is simply called in the USA) is just as attractive as it is affectionate.

The coat does take a lot of effort to groom, but the result is always outstanding. Train this breed with the knowledge that it is soft and sensitive.

Because of the difference in standards, the English cocker spaniel became distinct in size from the American cocker spaniel. That led to both getting independent breed status.

In personality, they act similarly. The English cocker spaniel is just as merry as the American, and it is affectionate too.

It is suitable for new pet parents and can be in an apartment. Its coat is easier to groom, but in training, the American and English cocker spaniel need the same training style.

It originated in England and has existed for a long time. Amongst those who love this breed, there is Queen Mary of Scotland and her descendants Charles I and Charles II.

The English Toy Spaniel got recognized by the American Kennel Club in 1886.

Like the Cavalier King Charles spaniel, the English toy spaniel is in the toy group, and it makes an ideal companion, especially for an inexperienced beginner.

This breed is laid-back and has a manageable exercise level, and is also very easy to groom. It is loving, affectionate, and loves to play.

The “springer” in English springer spaniel refers to this breed’s ability to spring on prey to capture it for the hunter.

Needless to say, it is an excellent hunter. There was a time when springers and cockers were considered the same breed.

Now they aren’t, but we can still call them relatives. The American Kennel Club recognized this breed in 1910.

This breed should not be shy or aggressive as those are inconsistent with its personality. It is friendly, willing to please, and obedient.

Its enthusiasm is sweet to watch, and it generally has a happy disposition. It can be a good first-time dog and should be trained consistently. It also needs enough exercise.

The Irish water spaniel looks similar to a Poodle, and some people mistakenly see it as a variety of the more popular breed.

However, the Irish water spaniel is a breed of its own and was developed to be a versatile hunting dog.

The Irish water spaniel didn’t just flush, it also retrieved and pointed. It could adapt to both water and land, a definite plus. The American Kennel Club recognized the breed in 1878.

The Irish water spaniel is an alert and curious breed, but it tends to be reserved towards strangers, something not common amongst spaniels.

It is more independent in its ways than other spaniels but is very trainable.

The field spaniel is a medium-sized breed, and certainly not the biggest spaniel dog on this list.

It was developed in England in the 19th century as a black dog, different from the typical white dog.

When it was being developed, dog shows were becoming popular. Thus, these shows influenced how the field spaniel was developed.

Field Spaniels share the same independent spirit with the Irish water spaniel, and it also tends to be reserved towards strangers when it first meets them.

However, it loves people and shouldn’t be left alone for long. It is highly energetic as well, and no laid-back person should consider this breed.

The Nederlandse Kooikerhondje, or Kooiker for short, comes from Holland.

Historians suggest that this breed was the ancestor of a retriever known as the Nova Scotia duck tolling retriever, and similar to the retriever its job was to lure ducks to where hunters were. Kooiker is both a spaniel and a retriever.

This breed makes a good family dog. It is suitable for new pet parents and can be in an apartment if well exercised.

It is a friendly breed and generally bears goodwill to everyone it sees.

Training isn’t always smooth with it, however, so any prospective pet parent should learn to be patient.

The Sussex spaniel is unique and uncommon, especially for its appearance.

It is long and low to the ground, a trait that helped it flush birds into the air for hunters to shoot.

This breed also tends to be vocal, something other spaniels don’t always do. It has a low energy level, but its tenacity makes up for the lack of hyperactivity.

The low energy level is an advantage to new pet parents and apartment dwellers, so it isn’t a total weakness.

However, first-timers should know that the Sussex spaniel is still challenging to train. You need to be patient, kind and encouraging to motivate the slow pooch to respond.

The Papillon is also called the continental toy spaniel, and it originated in France, as the name implies. Papillon translates as a butterfly and pays homage to this breed’s ears.

It is an old breed and is considered one of the oldest toy spaniels. It was recognized by the American Kennel Club in 1915.

The papillon is an attractive and affectionate companion, but don’t expect it to be an inactive lap dog.

Papillon has the spirit of a hunting spaniel, and it would often be found running around in your yard.

It is a good ratter, so you can be sure your house will be rid of rodents—don’t leave a rodent pet close to this breed.

The Welsh springer spaniel is the last spaniel recognized by the American Kennel Club, and like many others on this list, it was developed to flush prey out for hunters.

It originated in Wales and was employed by royals to hunt in the 1700s. The American Kennel Club recognized the breed in 1906.

This breed enjoys being around its family, but isn’t too outgoing and may be aloof towards strangers.

It requires more socialization than most breeds on this list but is a trainable breed overall.

Many dog breeds can play the flushing role of the different types of spaniels, as well as a good number of spaniel mixes.

However, if you’re out for purebred spaniel dog breeds, these 15 are your best options.

Your choice is yours alone, and it would depend on many factors like your level of experience, the energy level of the Spaniel in question, and your environment.

Emma Harris has been a veterinary care assistant and a dog writer for over six years. She is a passionate dog lover who believes in treating all animals with kindness. Emma puts her experience with animals (especially dogs) into writing by discussing topics that act as go-to guides to dog nutrition, health, and care. ...