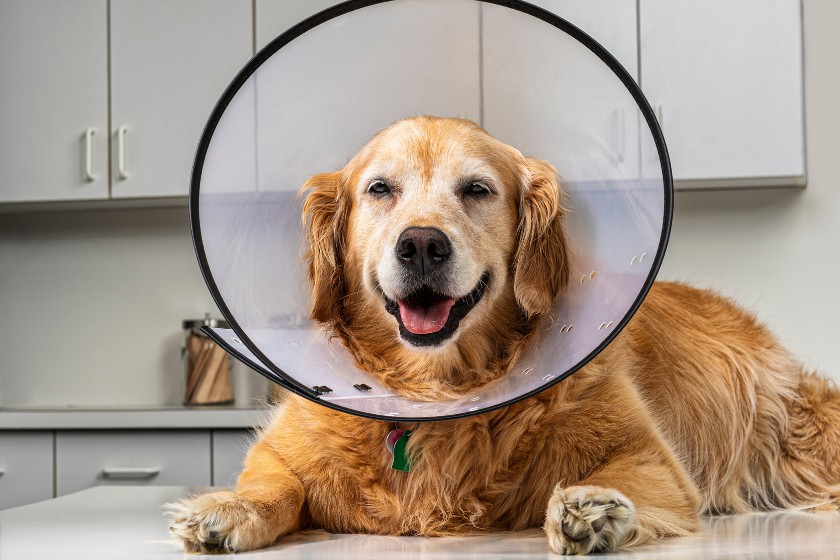 There are many safety measures a pet parent should take for their newly neutered dog. One of these is putting a protective cone on the dog.

This stops the dog from licking and biting the operated area, a habit many dogs are prone to.

While the cone might seem uncomfortable for the dog, it is protective. You wouldn’t want your pooch biting off the incision before the wound heals.

When should you want to remove the cone off your dog after neutering or spaying? The answer lies in how long it takes for the incision to heal.

Your veterinarian has to inspect the site to ensure it is fully healed before you take the cone off. Usually, the neuter incision takes between 10 and 14 days to heal.

Let’s delve into the details.

An Overview of Neutering

Neutering is also known as castration, and it is the surgical procedure used to remove a male dog’s organs.

For a newbie, this may not seem like a favorable move. Why should a male dog be rendered sterile? It has more pros than cons.

Unless you want to breed, you should consider neutering any male dog you want to have as a pet.

It reduces the risk of prostate infection as well as hormone-related diseases like perianal adenoma.

Another medical condition that neutering reduces the risk of is testicular cancer.

An unneutered male dog is prone to a lot of behavioral issues, especially when it needs to mate.

It may be more aggressive during this period, bark excessively, fight with other dogs, etc. All these can be cut down when you neuter the dog.

According to the Humane Society, neutering makes a dog live longer.

The lifespan of neutered dogs was considered higher than unneutered dogs. All these are enough reasons to neuter your dog.

How Long Does it Take for the Neutering Wound to Heal?

A neutering wound can take a week or two to get healed. It depends largely on the puppy itself, as these wounds heal on some puppies faster than others.

Generally, 10 to 14 days is enough time for this wound to heal. Always get a veterinarian to check the wound to ensure it is completely healed.

After the veterinarian confirms that it’s healed, it won’t be a problem if the dog licks the area.

The stitches may take more time to dissolve completely, going as far as 2 to 4 months. After that, your puppy will be completely free of the neutering “after-effects”.

Why Should a Neutered Dog Wear a Cone?

Dogs love to mouth objects, and when they have an injury, they will lick it. There are many reasons for this behavior, which include easing the pain.

However, licking a wound leads to disadvantages like infection, irritation, and tissue damage.

In surgical cases, licking or biting the wounded area has a greater effect. Your dog could reopen the incision, delay healing and aggravate the wound by opening it to infection.

The cone stops the dog from licking the infected area, which would helps quicken the healing.

Vets usually recommend these cones after the surgery, and it is something to consider.

How Long Does a Dog Need to Wear a Cone After Neutering?

Your dog needs to wear the cone as long as the surgical area takes to heal.

This means you shouldn’t remove the cone until a veterinarian does a proper examination of the incision.

Some pet parents might want to remove the cone after one week on the assumption that the neutering wound would have healed, but until you have a veterinarian examine it, do not remove the cone.

The estimated time a dog needs to wear a cone before taking it off is 2 weeks. It could be earlier or not, depending on the wound.

Your efforts in caring for the surgical site can also shorten the process, as well as the pup’s activity level.

What if My Dog Doesn’t Want to Wear a Cone?

There are many reasons a dog may not want to wear a cone, but it all boils down to discomfort. The cone requires an adjustment to a dog’s routine.

If it is uncomfortable, it’ll make life unbearable for your lovely pooch.

Here are some factors that could make the cone uncomfortable for your dog:

Tips on Comforting a Dog After Neutering

Neutering isn’t pleasant for many dogs, so they need you for comfort during those periods. Let’s equip you with some tips!

Dogs should wear cones after getting neutered for their protection, and you can remove them once the surgical site is healed enough.

This could take up to 2 weeks. During this period, your effort is necessary and can pay off in the end when the benefits of neutering start rolling in.

Emma Harris has been a veterinary care assistant and a dog writer for over six years. She is a passionate dog lover who believes in treating all animals with kindness. Emma puts her experience with animals (especially dogs) into writing by discussing topics that act as go-to guides to dog nutrition, health, and care. ...