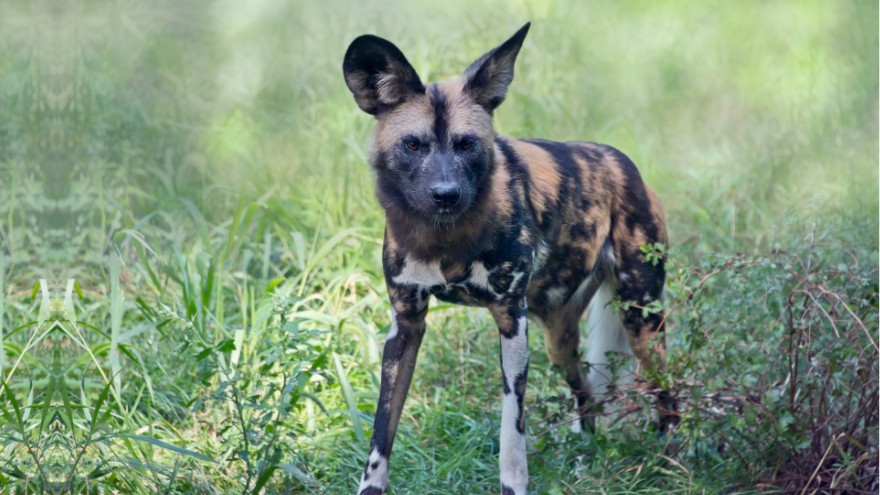 “The dog is man’s best friend” is a common quote among millions, thanks to man domesticating these canines for millennia.

These wild animals have existed for millions of years before human evolution, explaining the existence of a few wild breeds worldwide.

Therefore, we can classify the African Wild Dog, Dhole, and Jackal as wild dogs.

Discover the top ten wild dog breeds in the world, their habitat, geographical range, and other facts you should know.

A portion of the reddish area on the red wolf’s coat gave rise to the name.

Red wolves used to inhabit most southeastern United States, but their range has since reduced to extreme southeastern Texas and southwestern Louisiana.

According to the IUCN, the red wolf is critically endangered. Before becoming endangered, red wolves lived in mountains, lowland forests, and wetlands.

Gray wolves, also known as timber wolves, are canines with long bushy tails that are often black at the end. Typically, their coat is a blend of a brown-black mix.

According to Animal Vivid, wolf colors and size varies based on where they reside, with northern wolves tending to be bigger than southern species.

Wolves can survive in various settings, including tundra, woodlands, forests, grasslands, and deserts.

Wolves are wolves, but the Siberian Husky resembles this wild canine in various settings, including tundra, woodlands, forests, grasslands, and deserts.

Wolves are wolves, but the Siberian Husky no doubt resembles this wild canine.

The typical color of this fox’s coat is red, but it can also be rusty or silvery. It has a white underside and a gorgeously bushy tail with white tips on the fur.

Arctic, Central America, Central Asia, North Africa, and Australia are just a few places where you might find the red fox.

This wild dog inhabits central and eastern South America and is distinguished by its long legs and a dark mane on the back of its neck.

The rest of its coat is reddish, similar to that of the red fox, but its long tail can be white or black, and its legs have black “stockings” that allow it to see over the tops of the grass.

It has a fox-like dark muzzle. This wild dog occupies open grasslands and farms and has benefited slightly from forest clearing. It eats mice, birds, ants, rabbits, and fruits.

Other names for these fluffy animals are White foxes, Polar foxes, and Snow foxes.

They have thick, insulating fur, which also serves as camouflage, making them ideal for life in cold climates.

Arctic foxes can be found in North America, Europe, and Russia’s Arctic and Subarctic regions.

While they can be found in Canadian boreal forests, Arctic foxes prefer tundra and pack ice.

The arctic fox’s primary food source on land is a rodent known as a lemming, which lives in the tundra.

The population of the Arctic fox species grows and declines in direct proportion to the presence of lemmings.

Jackals are members of the Canis genus and are related to dogs. Three jackal species exist — black-backed, golden, and side-striped.

Jackals exist in different parts of Africa, especially in the east and southern Africa.

The black-backed jackal spends most of its time in savannas and wooded areas.

The golden jackal in dry environments such as deserts, open savannas, and arid grasslands, and the side-striped jackal in damp savannas, marshes, bushlands, and mountains.

Dholes are also referred to as Asian or Indian Wild Dogs. They are social creatures, with packs of up to forty members.

Dholes behave similarly to hyenas when hunting in packs, disemboweling, and eating their prey while still alive.

From Siberia to the Malay Peninsula, Dhole can be found in eastern and southern Asia.

Coyotes are distinguished by their drooping tail, which is carried beneath their back when running, and their pointed, upright ears.

Coyotes are found all over North and Central America, endemic to the Nearctic region.

They run north from Panama through Mexico, the United States, and Canada. The coyote’s habitats include fields, plains, and densely forested areas.

Despite being known as an Australian wild dog and being native to Australia except for certain parts of the southeast and the island of Tasmania, the dingo is not restricted to the country nor originated from Australia.

Southeast Asia is also home to this wild dog. In Australia, the dingo is an apex predator that feeds on various small animals depending on what is available locally; their prey includes rabbits, rodents, birds, reptiles, and fish.

Forests, mountains, and deserts with water holes are among their natural habitats.

Once distributed throughout Africa, this threatened species is now mostly located in the southeast of the continent, with only about 6,600 African wild dogs left.

These wild dogs primarily inhabit Africa’s dry regions and savannas and hunt during the day, preying mainly on antelopes.

However, they look closest to dogs with a long line of domestication. They have a strong sense of community and can form packs of up to thirty dogs.

One can find prey in environments like woodlands, scrublands, and mountains if there is available prey.

Are African wild dogs from wolves?

The African wild dog is neither wolf nor a dog as they are from different genera; however, recent molecular evidence suggests that dogs descended from the gray wolf, sharing a common ancestor, some two million years ago.

Are there dogs as big as lions?

Dogs in the wild are some terrifying creatures, thanks to their speed, strength, and jaw power. However, comparing their size to wild cats is asking for too much. The timber wolf is the largest canine. Still, its size pales compared to lions and tigers.

While domestic dogs are friendly, people would rather avoid encountering wild canines like wolves, African wild dogs, or coyotes.

They have no history of domestication nor have enjoyed company among humans like domestic dogs. However, these animals rarely attack humans. African wild dogs are not dangerous to people in the wild.

Therefore, it should not surprise you that your fido has relatives in the wild, inhabiting arid environments, fields, plains, and other feral habitats.