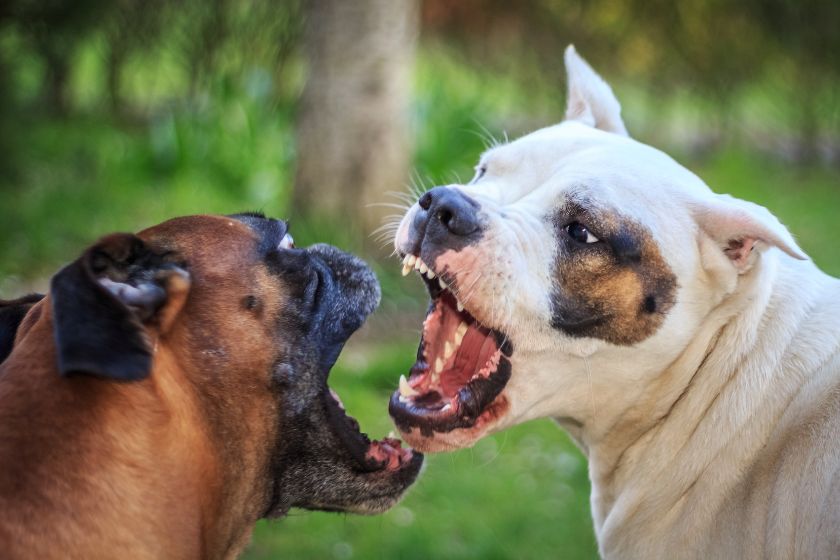 No one wants to be embarrassed to watch your dog get aggressive with another dog, especially if your dog is the initiator.

The apologies and excuses might put you in a difficult position, and you could be tempted to punish your dog; hence, you should know how to discipline a dog after fighting.

Even when the fight didn’t occur in a public place (such as two dogs living together), the idea of your dog getting aggressive would still be disturbing.

That said, there is a better way to discipline your dog without punitive measures. It is more advantageous as any harsh corrections could make your dog rebellious.

You shouldn’t overlook the behavior, however, so you need a proper way to discipline.

How do you go about that? We have the answer. Read on to learn more!

In this Article show
Why Do Dogs Fight?
When Does a Dog Fight Become Intense?
What (Not) to Do During a Dog Fight
What (Not) to Do After a Dog Fight
How to Discipline a Dog After Fighting
1. Stop the fight
2. Timeouts
3. The cause matters
4. Have a strict order of doing things
5. Make discipline a lifestyle
How to Make Peace Between Dogs
Frequently Asked Questions
Why shouldn’t I hit my dog after a fight?
Can dogs live together after fighting?
How long should I keep my dogs apart after a fight?
Wrap Up

Why Do Dogs Fight?

Dogs have different reasons for fighting, which isn’t always the same as humans.

We tend to have emotional reasons for fighting, but dogs don’t always fight because one doesn’t like the other.

Dogs fight to guard their resources, to establish dominance and control.

This doesn’t mean they can’t have an emotional reason for fighting.

Dogs sometimes fight out of fear, to defend themselves from a threat, or if they’re overstimulated. A dog that’s in pain is also more likely to snap and get aggressive.

We should distinguish between dogs playing rough and fighting. According to the experts, the body language and dog’s behavior are dead giveaways.

Fighting dogs tend to be tense, stiff, move with exaggerated aggression, and are more likely to snarl.

When Does a Dog Fight Become Intense?

How do you know the right time to intervene? Ideally, this should be before the fight becomes intense and leads to serious injuries.

There are telltale signs that a dog’s fight is getting bloody, and sometimes it escalates quickly that you might see these indicators within a few minutes.

By contrast, other signs show that dogs are playing rather than fighting.

Their mouths are often open and they grin, they bounce in circles rather than being agitated, and they approach themselves rather than try to get away.

What (Not) to Do During a Dog Fight

A dog’s fight can be confusing for you as a pet parent, especially when you’re a newbie.

There’s a right and wrong way to break off a dog’s fight, and if you go about it the wrong way it could do more harm than good.

We’d look first at what you should avoid, and later the ways you can break off a fight.

One thing you should not do is put yourself between both fighting dogs. They are not in the right frame of mind and could inadvertently attack you.

Do not use your hands to separate them either. That won’t be a good idea.

Don’t grab any dog by the tail during the fight. Even a calm dog will snap when pulled by the tail, much less an aggressive one.

Don’t try to bite, hit, punch or whip any of the dogs too. Finally, avoid putting your face too close to the dog.

Here are better ways to break off a dog fight:

What (Not) to Do After a Dog Fight

The emotional high that a fight causes you might not subside with ease, depending on how intense the fight was.

It can be taxing and scary, keeping you unsettled even after a fight. You have to stay calm and logical after the fight subsides (or is broken off). Your panic may not be effective after the scuffle.

Because dog fights aren’t always tied to emotions, they may soon go about their daily activities. Do not dwell on the fight too.

Take a few breaths to keep your emotions in check, then see if they have any injuries. Know if they’re light bruises or if they require medical attention.

Wipe off any blood with a clean cloth, and if both dogs belong to you, keep them far from each other for some time. The recommended hours of separation is 48 hours.

The next thing to do would be to instill discipline in your dog (or dogs). We’ll look at that next.

How to Discipline a Dog After Fighting

Much has been said about stopping a fight, and we won’t need to repeat the detail.

Do stop the fight before trying any other step, as it would be illogical to discipline when you haven’t ended the fight.

Try not to scream when stopping the fight as that might come across as an encouragement. Of course, harsh methods are a no-no.

The next step you can take is a timeout, where both dogs are confined in separate rooms until they calm down.

These rooms would be reserved for after-fights, so they can associate it with bad behavior.

Timeouts are effective as a simple way to express disapproval.

If both dogs belong to you, look for what triggered the fight.

Was it a toy? Your attention? Food?

Taking away the cause would register that a fight will lead to losses for both dogs.

It also enforces your position as leader of the pack. For example, if they were fighting for a toy, take the toy away.

4. Have a strict order of doing things

Dogs thrive on consistency, and one way to keep them disciplined is by establishing a schedule.

Have a routine for every important action they’ll take during the day like feeding, exercising, and sleeping.

This certainty can reduce the number of fights as the dogs will know there are enough resources and not fight for more.

Doing things together will keep them friendly and reduce the risk of jealousy developing.

Discipline doesn’t only apply to wrongdoing. It should influence every part of their lives.

Have time for everything, including playtime. Set some boundaries too, and ensure they know you are in charge.

Related: How To Train Your Dog To Ignore Other Dogs

How to Make Peace Between Dogs

After a fight, you would want your dogs to socialize once more. Dogs don’t keep grudges, and after the fight, they may not be spiteful towards the other dog.

However, without proper socialization, both dogs may fight again, and this can happen whether or not the dogs are living together.

You’ll need both dogs to make peace with themselves. If both dogs are yours, you can achieve this by getting the aid of someone.

Start walking down a path with Dog A while Dog B and the helper stay 25 to 30 feet away.

Give your helper a sign to walk down Dog B on the same path as you and Dog A.

If they show any signs of aggression while drawing close, step back some distance and repeat the process.

When both dogs can calmly move toward each other without issues, let them interact.

This should be done with both you and the helper supervising. Repeat the previous steps.

Let them interact more at home, but they should be leashed. When they become more comfortable around themselves, you can unleash them. They should still be supervised.

If only Dog A is yours and the pet parent of Dog B is someone you know, you can try out the process.

If the pet parent is a stranger, you could just avoid any encounters for some time.

Finally, don’t be unfair when dispensing penalties to both dogs. If one gets more than the other, it sends a wrong message and could serve to make them hostile.

Why shouldn’t I hit my dog after a fight?

Physical punishment only causes more harm than good as it fuels the dog’s aggression and makes it more likely to attack you in a fit of rage.

There are other ways you can discipline your erring dog without hitting it.

Can dogs live together after fighting?

Dogs can live together after fighting, as they do not keep grudges. However, without proper steps at reconciliation and proper boundaries, they may get into more fights. You’d need to keep an eye out on both dogs after a fight.

How long should I keep my dogs apart after a fight?

Dogs need to get timeouts from each other after a fight, during which you check them for injuries. You should keep them apart for 36 to 48 hours after a fight.

A dog fight can be scary for you, but fortunately, there are ways to separate them, discipline and reduce the chances of a similar fight occurring later on.

The tips and suggestions on this list are enough to get you started and remember that peace can still reign between your pooches.

Your dog can also learn to be polite when outside.

Also See: Why Are Chihuahuas So Aggressive? (15 Tips To Stop It)

Robert Miller is a dog behaviorist and professional dog trainer. With more than eight years of hands-on experience in the field, Robert relishes sharing his vast knowledge to help prospective pet parents choose the right dog breeds that suit their lifestyle and provide dog owners with the information they need to ensure they raise a well-behaved canine companion. ...